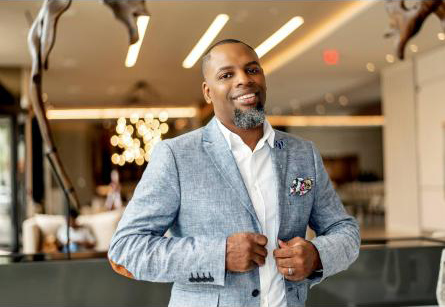 Howard Johnson Jr’s story is one of growth and transformation. It is the story of a man who has turned his challenges into successes and his mistakes into life lessons that benefit both him and those he has touched. When the tale of his life is documented, it will not be an account of a man who succeeded despite the hardships he faced, but rather an inspirational narrative of someone who took everything life handed him, both the good and bad, and used it to power his advancement.

In many ways, Johnson is an enigma. He never seeks out the spotlight, and yet his presence stands out no matter how large the crowd. He never brags about his accomplishments despite the overwhelming local and international recognition of his authority in real estate. As the celebrated principal of Howard Johnson Realty Limited, he has amassed a laundry list of professional accomplishments but remains extremely down to earth.

Johnson has mastered the art of self-awareness and has used his many talents and interests to make him the best version of himself, and he is at the top of his game.

Many of the attributes that made Howard Johnson Jr who he is today were forged very early on in life. His penchant for real estate, strong work ethic and excellent service he inherited from his father, Howard, who was a real estate agent and sales manager. His mother Iris was a math teacher, and he attributes his affinity for numbers to her, jokingly noting “that’s why I can calculate commissions”. He also credits his mother with introducing him to humanitarianism, colour, art and culture at a very early age, lessons that have stayed with him all his life.

His love of music ministry he got from his father, also a singer, who still remains an active participant in the Seventh-day Adventist (SDA) Church in Jamaica. “He is not a trained pastor, but my father is an elder in the church and a preacher.” He credits both parents with instilling in him a strong sense of spirituality.

In 1986, Iris made the difficult decision to leave Jamaica with her son and move to the United States to seek a better life for her family. This he remembers as being characteristic of her ability to take calculated risks. “I was in either grade five of six when we left. We were in the US until 1992, and during that time, we lived in Maryland, Alabama and New York. It was not an easy journey, and she faced discrimination and other challenges while we were there.”

Today, Johnson is an inspiration and role model to numerous at-risk youths, not only because he has accomplished so much, but also because he, too, went through a period where he lost his way. Like so many youths raised in very religious families, as a teenager, Johnson began exploring life outside the church. He recalls, “as soon as I got a little freedom I did what Jamaicans call bruk out”. This journey took him down a less-than-ideal path, which led to him becoming entangled with an unsavoury crowd and becoming a young father. Not even his father’s frequent visits to help young Howard in the US could get him in line or made any difference.

Johnson’s daughter was born in 1992, the same year he and his mother left the US for the Bahamas. “My mother, the mother of my child, and other people who knew and cared for me thought it was best for me to leave that environment, for my own good.”

He enrolled in the College of the Bahamas, where he was studying marketing, and even ventured back into the church, where his involvement in music and basketball served as an incentive to come back to the fold. However, this happiness was cut short when a car accident left him injured. He was thrown from the cab of a pickup after reckless driving by one of his friends caused the vehicle to collide with a tourist bus. The result was a badly broken leg which put him in the hospital.

“When I woke in the hospital, my mother was right there holding my hand and praying for me. I was there for about two and a half weeks and every day she would walk up a hill to bring me breakfast, lunch, and dinner. She even brought food for the other people on the ward.”

After his release, it was recommended that he return to Jamaica to seek treatment from a specialist. He left his mother and returned to live with Howard Johnson Sr and the rest, as they say, is history.

Looking at Johnson today, one would never guess the complexities of his past and he has come a far way since his troubled young years. Since then, he has found success, love, and happiness and has built an impressive reputation for excellence which has led to him becoming one of the most respected names in Jamaican real estate.

What is even more admirable, though, is that he has accomplished all this while maintaining a healthy work-life balance and being heavily involved with the church through his much-sought-after music ministry. In fact, he has led a Christian-based musical group called Euphony since 2003. They have toured the island ministering through music and have built up a considerable following.

Johnson cemented his rededication to the church by once again becoming baptised, and instead of hiding his past, used it as part of his ministry to show others that they, too, can make the necessary changes to live the life they deserve. “When I came back home I was invited to different churches to share my story. Some people find it really hard to believe, looking at me now. But I never covered it up because it is part of who I am and has helped me grow. I also go back to it when I mentor young people to show that I understand the challenges they are going through.”

For young people who feel that they have lost their way, Johnson recommends that they revisit the positive principles they have been taught throughout life and, most important, to stay grounded and be their authentic selves. “Never forget where you are coming from. Stay focused and true to yourself. When you try to emulate others you sacrifice a part of yourself. God created you as you were and you need to live that truth.”

Johnson met his wife, Denniesa Hinds, in 2009. They had an instant connection, and soon after, he was certain she was the woman he would spend his life with. “Even before we began officially dating I knew she was the one. I first saw her at a Music Day programme and I remember saying to my friend, that woman is going to be my wife, I could just feel it.”

They were married in 2012, the same year he lost his mother to cancer. She was there for him as he went through that most difficult time, and has since been his rock, best friend, and partner in all things. He credits her with helping to create and maintain that balance between the different parts of his life. He notes, “My wife is my biggest supporter and motivates me to keep on doing what I do best. I love her dearly and cherish each moment we share during our life’s journey.”

MASTER OF HIS CRAFT

After helping out with his father’s real-estate tasks, Johnson decided to enrol in the real estate certification course at the University of Technology in 1997 and never looked back. A year later, Johnson joined Valerie Levy and Associates as an agent, where he worked for a while honing his craft. After Valerie Levy, and a few other short stints at other real estate firms, Johnson started his own real company, Howard Johnson Realty, and began trading as a company in 2005. In January 2012, however, due to additional family commitments, such as his marriage and his ailing mother, he opted to form a partnership.

After another six years, the valuable experiences during that period motivated Johnson to return to his very own company, this time as a limited liability company and with hopes of creating a small group of companies to include other areas of real estate and a foundation in his mother’s name. He also pursued an incredible range of academic and practical certifications in the field, making him one of the most qualified practitioners locally.

His mastery has by no means gone unnoticed. In 2014, Johnson was recognised by the US-based National Association of REALTORS®️ as the International REALTOR®️ of the Year out of members from 100 countries. He is the only Jamaican to have sat on the board of that organisation, where he is currently sitting in his second term. Additionally, over the years he has sat on many of NAR’s committees, lending his expertise and vision to the industry, globally.

Johnson has also served four terms as president of the REALTORS®️ Association of Jamaica, is a member of both the Real Estate Board and the Commission of Strata Corporations. As the Multiple Listing Service (MLS) chairman, he and his committee are credited with introducing the now industry-standard MLS system to Jamaica in 2010.

All this was accomplished while building his own empire in the form of Howard Johnson Realty. HJR has built a reputation as one of Jamaica’s most highly recognised and recommended brokers and is making major moves in the industry, such as its recent acquisition of a company yet to be publicly announced.

Despite all the awards, accolades and board positions, however, what makes Johnson most proud about his career is the ability to serve his clients well. “I treat the person buying their first home for five million the same as I treat the person buying an expensive investment property.” It is this high level of customer service that has remained the cornerstone of HJR, so much so that a sizeable portion of the firm’s business comes from repeat clients and referrals.

His advice to new agents seeking success in the industry is, “When you enter the business never focus on the money. You will get so caught up you’ll do anything to get it. Focus on deliverables and meeting the needs of your customers. Make sure that their needs are met you will be successful.”

As he works towards the expansion of his business, the one thing Johnson never forgets is to always be himself, no matter what. He has used the many experiences he has had in his life as fuel to help propel him forward, and he gladly welcomes the challenges that will come as he continues to climb the ladder of success.

“My competitors do not intimidate me, but instead motivate me. I seek not the validation of anyone but God and the satisfaction of my clients. As a locally grown business I, with the help and support of my family, team, and friends, stand tall in the industry and am guided by my ethics and discipline, but I am not perfect. However, I am still Howard Johnson Jr.”